Tax records can be a useful tool in genealogical research.  In general, they don’t specify family relationships, however by looking at consecutive years, they can provide information such as ownership of property, when a person moved into a county and how long they stayed, when a person came of age, names of neighbors, and more.  It can be helpful in locating where someone lived ,in lieu of a census or other record, and the overall wealth/personal property they held.

HSP’s collection contains numerous types of tax records from the 17th-19th centuries for Pennsylvania and elsewhere. It is recommended to search our online catalogue, Discover, to find records specific to your research.

One of the important things to note, that like many other records used in family history research, the types of and information recorded on tax records varied from country to county, and time period to time period. Some investigation into the desired time period before searching the tax lists will help tremendously. 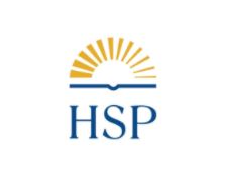 Who, When, and What is being Taxed?

Who, When, and What is Being Taxed?

In general, early taxes were levied by the county, city, or state where that person resided. Until the early 20th century (1913), Federal taxes were levied sporadically. That said, some of those federal taxes yield a wealth of information. For example, the 1798 Direct or “window” tax records contain a valuation of homes and give details such as acreage, construction materials used, structure sizes and more.  It’s one of the most detailed records of this type of information for that time period.

The frequency of levying taxes also varied.  For example, in 1799, Philadelphia was electing officials and taking an account of taxables every three years. This followed the standard set by Pennsylvania. Other counties typically followed the state’s (or neighboring counties’) lead, but not always. So it’s suggested to look into this matter when searching for a tax list.

Some Types of Taxes

In the colonial and early American era, a common tax was a poll or “head” tax. This was an assessment for each adult male of the household. Older males could often age out of the tax, and others, such as ministers or those too poor to pay were exemp

Land tax (or real estate) was another typical tax. It’s important to note that this tax was not always levied on the property owner, rather sometimes on the person using it.  For example, a farmer renting a piece of land would be responsible for the tax because he was the one reaping profits from the use.

Some types of personal property were subject to taxes. This included farm animals and carriages, enslaved persons, and stocks and bonds, among others.

What Can Tax Records Tell Me?

What can Tax Records Tell Me?

What can Tax Records Tell Me?

Records can contain information such as the name and residence of the tax payer, description of real estate or personal property, number of enslaved persons, and more.  Typically, one will find three types of early tax records. The terminology varies over time, but below are a few examples of common terms:

Keep in mind that the elderly, poor, or infirm were often omitted from these records.  Sometimes, one will find notation or a separate list of these names. This could be at the end of the tax rolls, or a separate document entirely. 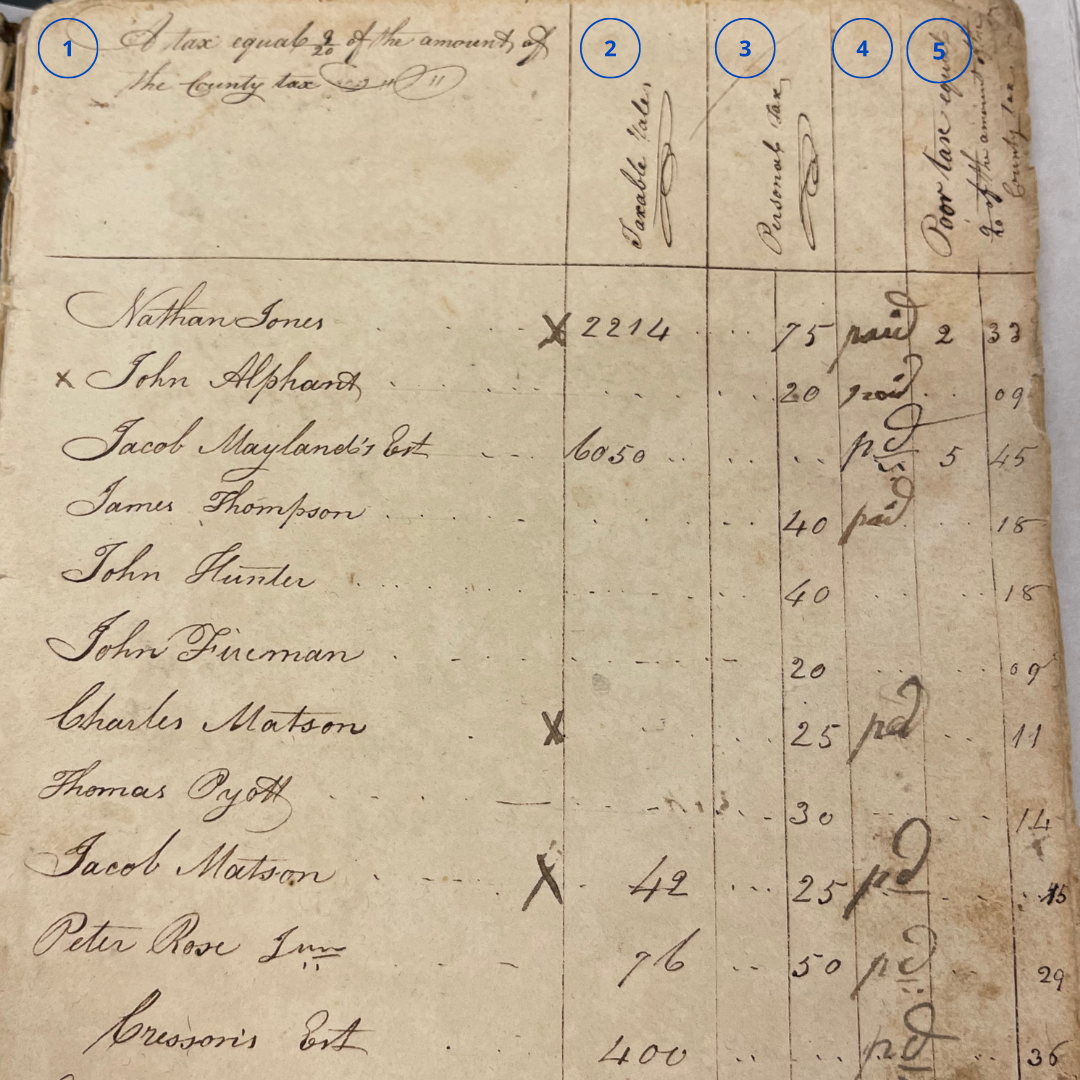 The image above (click to enlarge) is from the poor tax record for Blockley Township of Philadelphia from 1815. Each ward, township, etc., was responsible for allocating a portion of the tax collected for care of the poor and infirmed.  It shows the following columns:

Information being recorded changed over time and location as can be seen in the example below (click to enlarge). This record is the 1859 list for the 22nd ward in Philadelphia.  It shows the following columns: 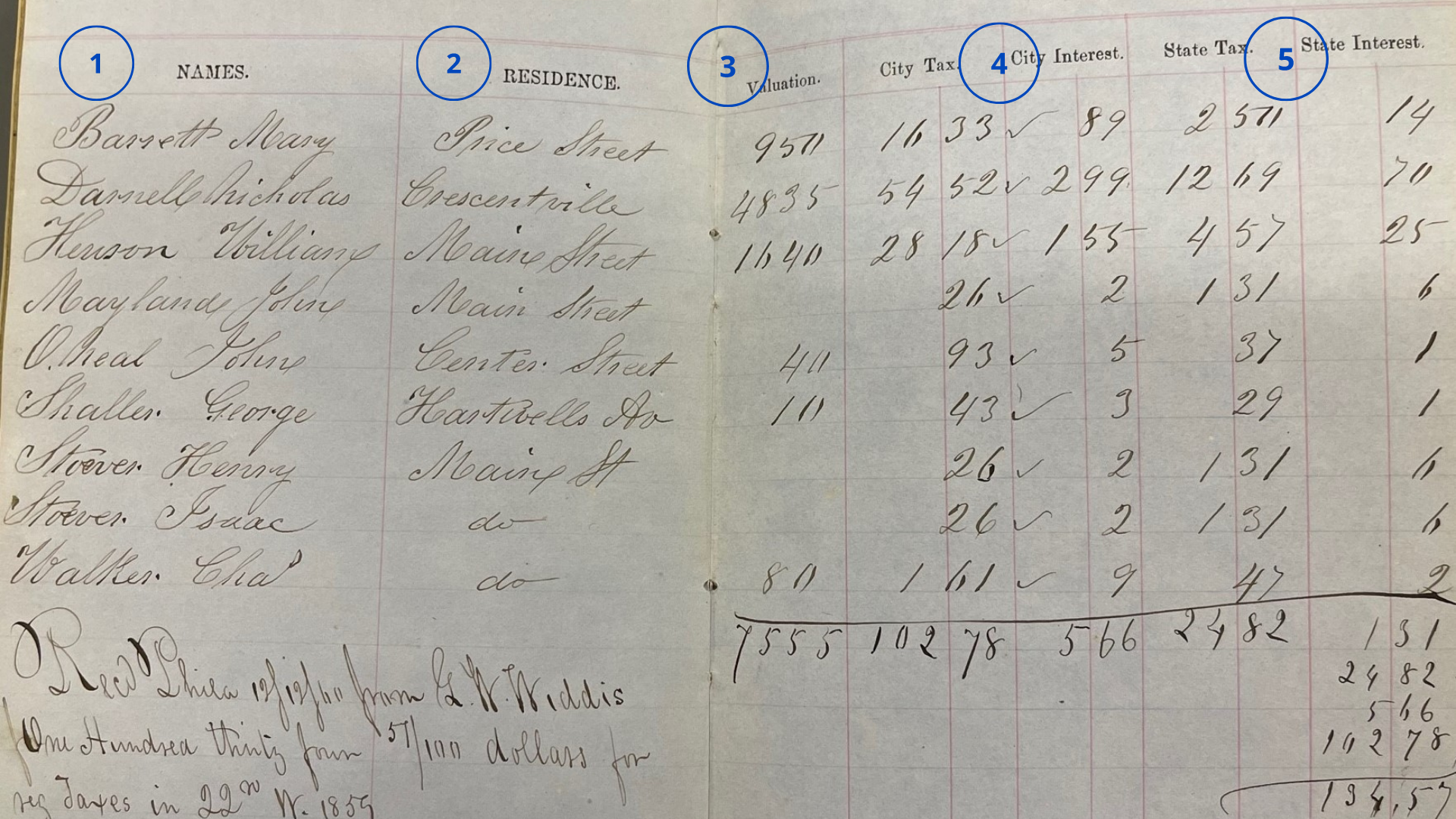 HSP holds a large number of tax records, including colonial tax records, at the county and state level for Pennsylvania, as well as other states such as New Jersey, Delaware, Ohio, Kentucky and more. They can be found in various formats such as: published books, microfilm and original manuscripts. Records relevant to your research can be found by searching our online catalogue, Discover.

A few examples are listed here:

Where Else can I find Tax Records?

Where Else can I find Tax Records?

Ancestry.com and FamilySearch.org have indexed and digitized some tax records for Pennsylvania. It is recommended to search for specific information on each of these sites.

Local and county archives and repositories often have tax related records.  Please contact them directly for more specific information on their holdings. A few examples of local archives are listed below:

Lancaster County Historical Society: Holds tax records from 1729 to 1939, with gaps. A complete list of their holdings is available on their website.